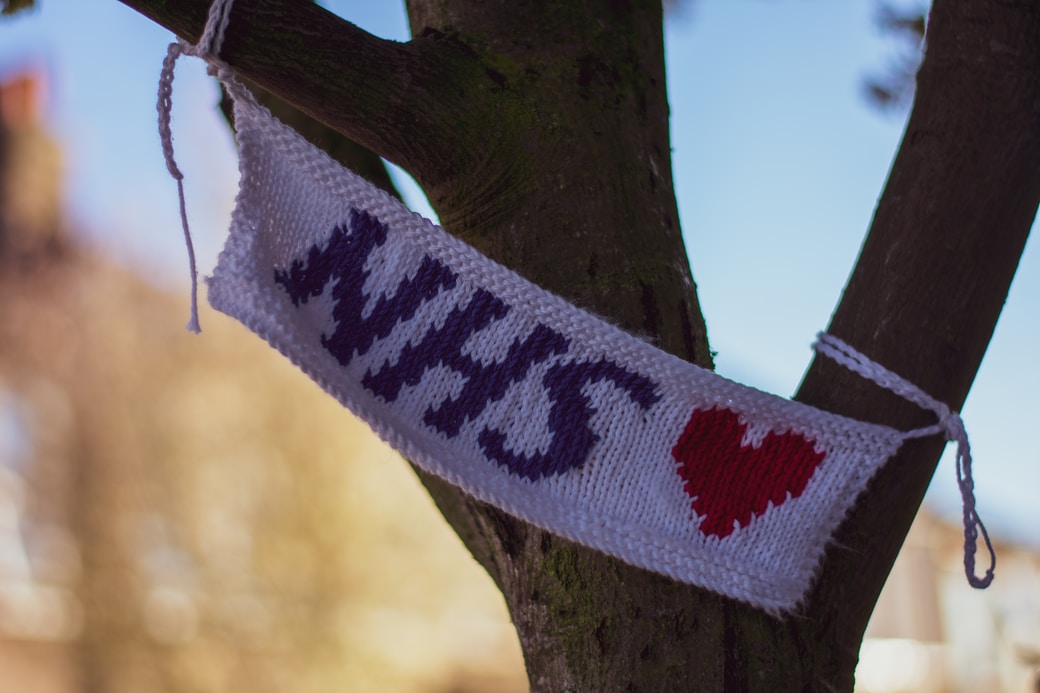 The NHS found itself on the cover of Grazia during the COVID-19 pandemic as hospital staff replaced actresses and models for the first time in the magazine’s history. Clapping the NHS was a feature of British life in 2020, as we honoured the sacrifices of frontline staff. Yet – the astrology says – the NHS is not going to last in its current form. So, what does the future hold, as the NHS reaches its birthday again, in July 2021?

Just one look at the horoscope and it’s clear that the old NHS will be replaced by a new model, perhaps because the waiting lists are now topping 5 million people, for the first time (reported by The Guardian on 10th June, 2021). In fact, 5, 122, 017 people were waiting for their free NHS treatment in the United Kingdom, back in April 2021.

The Virgo Factors in the NHS Astrology Chart

Virgo rules hospitals, doctors, nurses, private health insurance and also taxpayer funded free healthcare. The NHS has a Virgo Descendant at 25 degrees. Apollo at 15 Virgo. Mars at 23 Virgo. These, and other key chart factors, show the beginning of the end, for the old NHS. In fact, we can pinpoint dates. This looks like a huge increase in taxes to pay for the system and/or an open health care marketplace for people who can afford private health cover. Perhaps there will be an even more radical change. The NHS astrology chart shows a shock and a revolution ahead.

The Grazia frontline NHS models (below) were the difference between life and death for people battling COVID-19, but the reality of the astrological chart, shows rapid change at a speed which will leave the United Kingdom in a very different place.

There is a two-step transformation of the NHS in early 2022, with phase one in the second half of March, and phase two, in the first half of April. Mars at 23 Virgo in the NHS astrology chart is literally ‘a battle over health’ and it’s been there since the post-war period when the National Health Service was created. That hotspot in the chart is well and truly hit in 2022.

March 19th to 31st 2022, also shows Pluto, the big transformer of astrology, at 28 Capricorn. This is the first of two occasions (January 2023 is the other) when health tourism looks certain to end. Again, this looks like a two-step process.

Pluto at 28 Capricorn is a reshuffle at the top, so politicians or NHS chiefs will be moved around, or off the scene. Pluto at 28 Capricorn picks up the factors at 28 Gemini and Sagittarius (travel and tourism) in the original chart. On another level, Gemini rules transport, so we might be talking about ambulances and a sweeping transformation of emergency transport. Covid again?

Free For All Healthcare Is Over

The economic shock of Uranus at 12 Taurus on March 19th to 31st, hits the NHS chart precisely. Uranus will be in conjunction with the NHS North Node at 12 Taurus, and in opposition to its South Node at 12 Scorpio. Uranus is associated with a world turning upside down, and undoubtedly due to public demand, the old model of waiting rooms and waiting lists is set to flip. March 2022 is a revolution. It may be, that if you can pay for it, your health care is same-day. The word ‘free’ is associated with Uranus transits. Are we about to see a free market health care system in the United Kingdom? If so it will land with a bang. Uranus is associated with new inventions so this may also involve the internet (for example) or innovations we have not even seen yet. The NHS just won’t be the same from March 2022.

The United Kingdom of Great Britain and Northern Ireland has many ‘birth’ charts, each one showing a different stage in her history. The latest is set for the time that the U.K. was officially free of the E.U. and it’s here.

We associate Capricorn with the Prime Minister, but also Her Majesty the Queen. It’s about the man or woman at the top. So, it’s not hard to see that when the N.H.S. is transformed (more likely, replaced) in March and April 2022, we are also going to see a reshuffle at 10 Downing Street. Perhaps, too, at Buckingham Palace. You can see the dates below. It will be April 9th to 12th, 2022 in patterns that are not possible more than once in all our lives.

The old ‘free for all’ healthcare which began in 1948 looks finished, just before Easter 2022. You tend to get a lightning strike with Uranus transits, so what comes, does so suddenly. The evidence for this increases when you see what happens to the NHS, immediately afterwards, from April 9th to 12th. It may be that free health care remains for those on low incomes, but everyone else has to reach into his or her pocket, beyond the usual taxes. The Taurus/Scorpio themes in the chart are about funding. They are also about salaries for staff and the price of the pandemic. It is no longer enough for hard-working hospital staff to be celebrated by the public, by Easter 2022. This is a salary revolution. Perhaps – strike action. 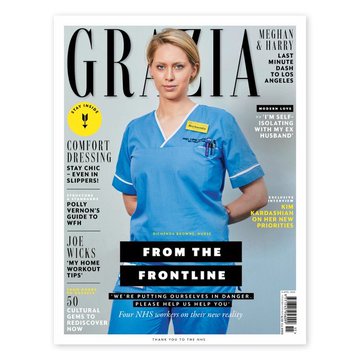 Here we have not just one, but four cycles all picking up Mars at 23 Virgo in the NHS chart. The money signs, Taurus and Scorpio are again, prominent. The NHS was also founded with the North Node at 12 Taurus and South Node at 12 Scorpio. On April 9th, 10th, 11th and 12th 2022, we find Chiron at 12 Aries. These transits are working both ways.

On April 9th-12th 2022 the NHS will be restructured financially. These are historic cycles and they pick up the two signs associated with taxation and insurance.

Watching the NHS Horoscope in January 2023

By the time we reach January 2023, Saturn is at 23 Aquarius and Neptune is at 23 Pisces, again picking up Mars at 23 Virgo (the sign ruling public health) in the NHS horoscope. Transiting Chiron at 12 Aries picks up the North Node at 12 Taurus and South Node at 12 Scorpio again, too. This feels like a government deadline has been set for massive changes to NHS funding and structure for January – the very start of 2023. The changes to the NHS horoscope are so extreme, that this looks like a backflip from the old model – waiting lists of 5 million people – and everything free. In fact, it’s a radical somersault. The focus on Aries suggests the face, or head, which Aries rules. This looks like a proposed new identity card and/or vaccine passport. When waiting lists top 5 million people (The Guardian) but you see these kinds of astrology cycles – that’s extreme change. 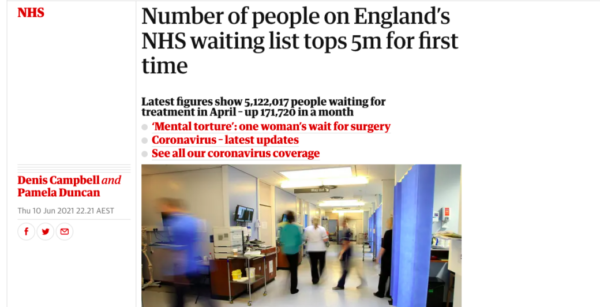 The End of Health Tourism

The other red flag for change in January 2023, is transiting Pluto at 28 Capricorn, picking up Mercury at 28 Gemini (the sign ruling short journeys by coach, train or ferry) in the NHS chart. Pluto at 28 Capricorn also hits the MC at 28 Sagittarius (the sign ruling foreign people and countries) and the IC at 28 Gemini (again, short-haul transport). Putting all this together, it’s a statement about health tourism on the NHS. It’s genuinely finished, in January 2023.

Pluto transits are final, because they are so rare. This may be the end of the reciprocal health care agreement between the United Kingdom and other countries, too. We associate Gemini and Sagittarius with Zoom on the Worldwide Web, so this also looks like remote, at-home, computer medical care becomes the norm, by January 2023. Of course, I am writing this two years into the future, so Zoom may have several rivals or replacement by then.

There is more to say about this chart (below) as the virus continues, along with its many variants, and the several attempts at vaccines. The transits are rare. Then again, so is this pandemic, so it makes sense that it should be 2022 and 2023 which reveal the biggest transformation and reform of the old NHS in its history. That’s what these charts are telling us. The NHS has never experienced a Uranus in Taurus transit. This looks like some of those old waiting room walls are going to shake in March and April 2022, and subsequently, January 2023. Uranus is very much about freedom of choice. It will land with a wallop. 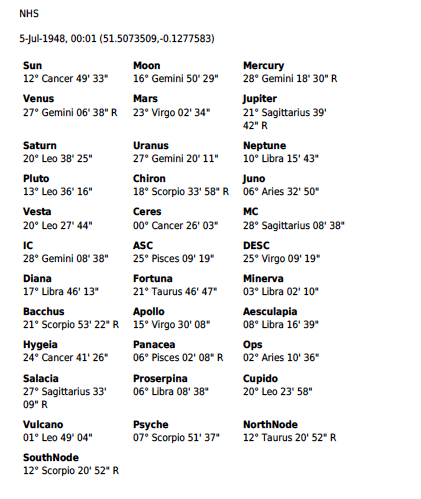