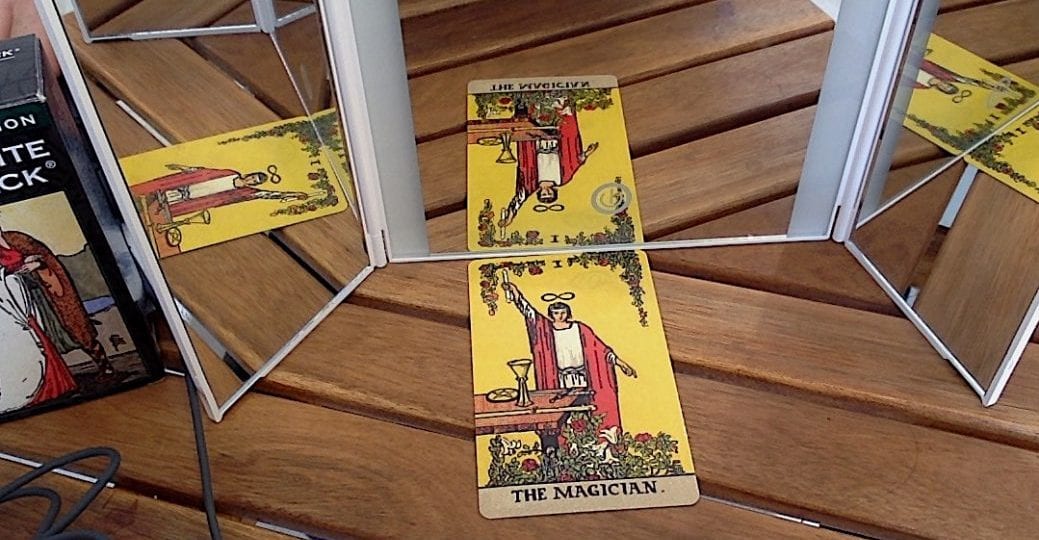 Tarot Podcast – Time Mirrors and You

How do you reimagine the past, and play with potential futures? Time mirrors! The old days of Tarot readings locking you into one outcome have gone. Science tells us, reality is there to be made by looking backwards and forwards. This podcast is based on a workshop in Melbourne in November 2019.

Looking Inside the College of Psychic Studies – Tarot and Time

Time mirrors sounds like something from science fiction, perhaps, but the Tarot cards are just that. Reflectors which you can use to rethink the past, shift your angle on the present and come up with many, many potential outcomes.

Tarot is wonderful for problem-solving in this way, and in this podcast and feature, I’ll show you how to do it. My inspiration, which I am now passing on to you, is Britain’s most interesting archive for psychics.

I recently accompanied my friend, Imogen Edwards-Jones, into the College of Psychic Studies to look at one of the very first decks of the Smith-Waite Tarot, launched at the start of last century. Imogen wrote up our visit in The Evening Standard with her usual style:

” I joined the college more than five years ago when I was researching a novel and have never quite managed to leave. It was described to me by a friend of mine, astrologer Jessica Adams, as “Hogwarts for grown-ups”. And she was right. She told me to turn up in the incredible library, packed with shelves of books on the occult, Wicca and spells, and the books that I was looking for would “make themselves known”. Obviously, they did. Obviously, they didn’t fly around the room and land in my hand but, obviously, I found some more alluring than others. And, obviously, I joined the college. Why wouldn’t I? Set up at the end of the 19th century, the college has been at the forefront of all things psychic in the UK for the past 135 years. Initially called the London Spiritualist Alliance, it really took off under the auspices of Sir Arthur Conan Doyle in the Twenties.”

Strange things happen at the college, just when you need them most, and what looks like a random rubber band, on a scuffed old table, with an even older deck of Pamela’s cards, led me to the podcast you can hear in this feature. Reading Your Possible Past, Confirmed Present and Potential Future

Having trained as a trance medium at the college, I was shown a completely different view of time. Later on, exploring the tarot of Pamela Colman Smith and Arthur Waite, I began to see how their unique view of the afterlife (shown in cards like Judgement) also contributed to a non-mainstream view of past, present and future.

I love this photograph, a rare original, of Arthur E. Waite as he preferred to call himself. Held in the archives at the College of Psychic Studies, it reveals him captured for all time – gazing into the remembered past, perhaps. He was looking backwards at something the photographer at Webster Bros studio could not see. He looks a little like Doctor Watson from the old Sherlock Holmes books here. The author, Sir Arthur Conan Doyle, nearly joined The Golden Dawn and would thus have been a contemporary of Arthur and Pamela. The Tarot and astrology, which Pamela and Arthur both studied at The Golden Dawn, are based on the same thing. Quirky time. Odd time. Strange time. Carl Jung called this ‘synchronicity.’

When I was handed a deck of Tarot cards over 100 years old to shuffle at the College of Psychic Studies, the rubber band holding the box together, fell into this shape. The lemniscate. It is sometimes called a Mobius Loop or Mobius Strip. You may know it as the infinity symbol. In this podcast version of a talk I gave some time after this astonishing experience in London, we worked as a large group to identify the likely past of a card (the left-hand side of the loop) and the ‘now’ (the small centre of the loop) as well as the possible future of a card (the right-hand side of the loop). Understanding the Before Tarot and After Tarot – New Methods

Working with new Italian decks based on Pamela’s original illustrations – the Before Tarot and After Tarot – is inspiring. You can glimpse so much about how your memory of what you assume happened (the remembered past) can be moved, rather like moving the angle of a mirror. Another way of thinking about these decks, is to see your life as a theatre set, being filmed for The National Theatre in cinemas. All angles work. All angles are ‘real’. Which seat suits you best?

The After Tarot is rather similar. The old way of learning Tarot (or being read for) when you were locked, hard and fast, into one outcome, or one verdict, are gone. In the podcast you can download now, I talk about astrologers like Dennis Elwell and how their view of time, building on the discoveries of Einstein, has altered the way we predict.

The heiress and Golden Dawn celebrity Annie Horniman began her Abbey Theatre in Dublin on the verdict of a Tarot card reading which proved to her, that her business venture would be a success. When W. B. Yeats came on board, along with Pamela Colman Smith, the cards began to show outcomes. Yeats would go on to win the Nobel Prize and Pamela would find her illustrations for Arthur Waite at the heart of a huge global boom in Tarot, which continues to this day. What is also interesting to modern readers, is the fact that Pamela’s visions have been borne out by science. She so often illustrated clouds in her cards. Along with the repeated theme of the lemniscate or loop, this is very close to shorthand for some contemporary 21st century ideas about what time might be. About what our reality might be!

If you missed my talk for the Tarot Guild of Australia, you can now download a 20-minute podcast explaining how to read past, present and future with a variety of different methods.